Kim Constable is a former member of NXIVM who says she left more than 15 years ago. She has an article about her success on Forbes.com. It is possible to buy stories in Forbes, and Kim may have bought this one.

The title of her story: “Utilizing AI To Reach Peak Performance In Health And Business: How The Sculpted Vegan Built An 8-Figure Empire.”
Annie Brown, a “Former Contributor,” wrote the story. In the article Kim, the word ‘data’ appears 27 times.  Data is a favorite word of NXIVM members.
On her Facebook, Kim touts the article, showing a photo of herself on what appears to be the cover of Forbes.
Kim claims that “if Forbes says it, it must be true.”
Here’s info on how to get a story in Forbes Magazine.
https://getonforbes.com/get-featured-on-forbes/
https://theoutline.com/post/2563/how-brands-secretly-buy-their-way-into-forbes-fast-company-and-huffpost-stories
Getonforbers.com shows you how they can buy you a Forbes article: “Just like a PR agency, we are able to deliver Forbes.com placements in a timely manner and according to your needs. Furthermore, we offer reasonable rates and won’t ask you to sign any long-term contracts. For more information, head over to our services page.”

Kim Is the Sculpted Vegan

She likes to help women better their butts by sending them to butt camp. An eight-week course she sells.
It appears to be a booty camp for butts.

There is evidence Kim thinks more of the butt than what science credits.

Here she is a before and after photo of her face.

Kim says she has been out of NXIVM for more than 15 years, and once had Allison Mack over to her house “many years ago.”

She was seen in this NXIVM picture in 2014.
She had Mack to her house in 2016.
In 2021, Constable wrote a letter to Judge Nicholas G. Garaufis for Lauren Salzman. She did not mention she was ever a member of NXIVM.
Kim also has Michelle Salzman on her staff at one of her 8-figure businesses – the Sculpted Vegan.
Michelle charges $250 per hour.

Kim also has a podcast. 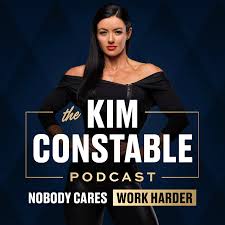 Here’s a sample episode:
“Sex Toys & Lube Talk. How To Have Better Sex – Interview With Sam Evans – Episode 99
“Sex is meant to be noisy, messy, and most of all, FUN!

“People use sex toys and lubes to help enhance their pleasure yet have no idea that what they’re using could completely destroy their sexual health and make sex anything BUT fun.

“From toys made of jelly to lubes with propylene glycol, most people don’t have a clue that what they’re putting in and around their most sensitive body parts (and even taking orally) could be contributing to things like:

“Sam Evans, co-founder of Jo Divine, a skin-safe and irritant-free sex toy company, is on the podcast today, giving us the juicy lowdown on sex toys, lubes, and how to have more pleasurable sex (especially after menopause).

“A sexual health & pleasure expert, Sam has been featured all over radio, TV, and the press….

“’Sex is meant to be noisy, messy, embarrassing, consensual, and most of all fun!’

“‘Your orgasm is YOUR responsibility. Not your husband’s.’”

In addition to her Sculpted Vegan business, Kim also teaches people a form of executive success.

She writes: “Did you know that I also teach people the exact steps to becoming millionaires in 12 months through my other online empire, The Million Dollar Mentor?

“If the thought of making 7-figures awakens the mighty entrepreneurial beast inside of you (how could it not?), then hurry up and get on my waitlist so you can be notified as soon as The Million Dollar Mentor becomes available again! And in the meantime, subscribe to my newsletter to get custom-tailored advice on how to achieve some truly massive business goals.”

Kim has one pet peeve that chaps her ass.

Kim writes, “Don’t you just hate it when women fitness trainers pretend they are teaching people how to develop their glutes – when all they are really doing is showing off their ass?”

If you want to contact Kim, you can go to this page.