Hill tweeted on Sunday: “It is with a broken heart that today I announce my resignation from Congress. This is the hardest thing I have ever had to do, but I believe it is the best thing for my constituents, my community, and our country.”

She is expected to leave office by the end of the week.

Is Hill’s Resignation What It Seems?

It’s hard to believe Hill is resigning from Congress because naked pictures emerged, revealing she was formerly in a “throuple” relationship with her campaign aide, Morgan Desjardins, and husband, Kenny Heslep.

She was openly bisexual coming into office.

She was one of the brave new Democrats – who won a Republican district – and helped flip the House of Representatives back to Democrat control to fight the evil scourge known as Donald J. Trump.

Why would she give up? Where is her dedication to the great cause? The district will likely flip back to Republican after her departure.

The naked pictures of Rep. Hill with her campaign aide – and another of her smoking a bong before recreational marijuana was legal in California – though embarrassing are not criminal or damning.

None of this is a crime. It’s kinky – but this is California.

She did give a hint in her letter of resignation that she feared more might come out.  I think therein lies a nugget of truth.

She wrote, “I know that as long as I am in Congress, we’ll live fearful of what might come next and how much it might hurt.”

Congress Is Too Good a Gig to Quit Over Nothing

The problem is that kinky Katie had an affair with her legislative aide – in this case, a male – which is against the ethics rules of Congress – made just before Katie got in – almost as if it was written for her – and she seems to be the first casualty.

The new ethics rule is you can’t have sex with taxpayer-paid assistants. You can have sex with anyone else  – who is of legal age – including campaign aides – because you pay them out of your own money.

But, as for taxpayer-paid staff, as of last year – you can’t fuck them anymore.

Which reminds me of a similar, somewhat newer rule for divorce attorneys. They can’t fuck their clients getting divorces. As one old-timer told me – “That used to be one of the biggest perks of matrimonial practice.”

It’s new-fangled  – promoted by Democrats – because the idea is that if you control their paycheck, they can’t give true consent.

They have to fuck you, sort of. Not that fucking Katie was like any kind of punishment for the many who did it, by all accounts. 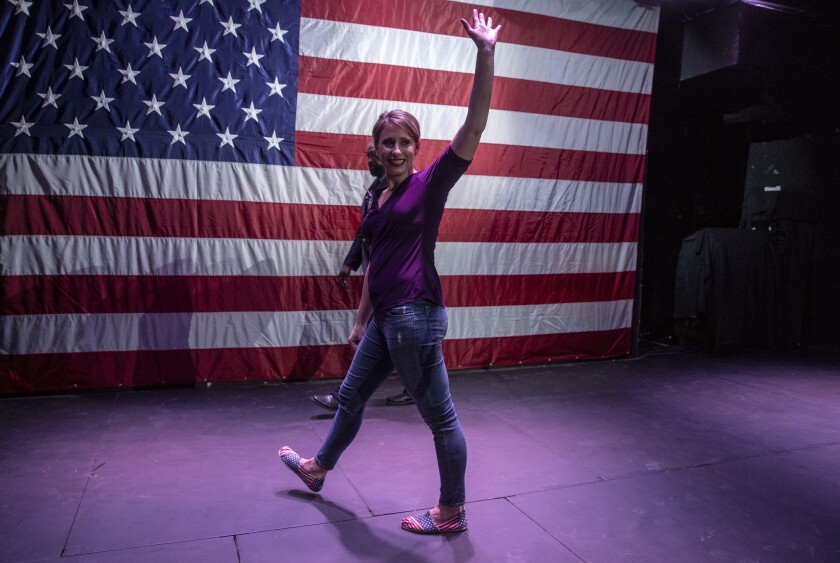 Of course, the real problem is – up until now – Katie Hill very likely lied.

She admitted, yes, she had sex with the woman assistant [the proof was right there in the photos] but she said she did not have sex with Graham Kelly, her boyish assistant.

She wrote to her constituents about how bad her husband was in exposing her and how bad the Republican party was for capitalizing on his exposing her – but at least she said she didn’t have sex with her legislative aide and looked forward to helping with the Ethics Committee investigation to prove her innocence.

Now she is halting the investigation, by her resignation.

“This is what needs to happen so that the good people who supported me will no longer be subjected to the pain inflicted by my abusive husband and the brutality of hateful political operatives who seem to happily provide a platform to a monster who is driving a smear campaign built around cyber exploitation,” Katie wrote in her announcement of resignation.

I suspect she resigned because she knew she was about to get caught.  Old subby hubby monster Kenny, who joined in with his wife and other women in threesomes and advertised her naked pics to find her men – was left out in the cold.  She left him and he was pissed.

It was not that Kenny was against her fucking other men, but he wasn’t asked to watch and she was leaving him all alone on the ranch they had lived in together. So he blew her up.

Katie, of course, knows it’s wrong to have sex with subordinates [not counting Kenny, her hubby, who she supported].

Katie knew – because it’s a big part of the Democrat party platform – to protect women – that men aren’t supposed to have sex with people who they pay salaries to – since that gives men coercive control of women.

But this was a rule meant for men.

Still, there was no way to argue that it is truly gender-specific. It was supposed to stop men – and it, unfortunately, stopped Katie. Even Democrats could not get away with making it only a rule against men having sex with subordinates.

In a letter to her constitutes last week, Hill admitted the relationship with Morgan, her campaign staffer, was wrong: “I know that even a consensual relationship with a subordinate is inappropriate, but I still allowed it to happen despite my better judgment.”

Katie Had Coercive Control Over Graham – Since She Could Fire Him

And even though Katie knew she shouldn’t fuck Graham [though she could fuck Kenny, Morgan and all the men who responded to her cuck ads] – horniness prevailed – and who else should you fuck, if not those closest to you? Power and propinquity – that’s what it was – and Katie made the most of it until her husband blew her up.

Yes, she fucked her aides. And one was a boy/man, soyboy, Graham Kelly.

She might have got past that too if she hadn’t lied.  Her mistake was she started off categorically denying her affair with Graham – and getting him to deny it too.

“Allegations that I have been involved in a relationship with Mr. Kelly are absolutely false,” Hill told Fox News. “I am saddened that the deeply personal matter of my divorce has been brought into public view and the vindictive claims of my ex have now involved the lives and reputations of unrelated parties.”

That statement is probably as true as her next statement to Fox News:

“This smear campaign will not get in the way of the work I am doing every day to move our district and our country forward. I am truly grateful for the outpouring of support I have received from colleagues and constituents alike, and I know we will get through this together.”

She said that on Thursday. By Sunday, she announced she was not going to work to move her district and the country forward. She was quitting. Why?

She said she was trying to protect others. That may be true and one of them is Graham.

I suspect that hubby Kenny has proof of her affair with Graham. He did not just make this up out of whole cloth. He knew.

And Graham might break under pressure. He might have agreed to lie for Katie at first – that there was no sex between them, but, if under oath, under penalty of perjury – he lied – well just for the sake of one hot mama, he ain’t going to jail.

So Katie woke up and realized that what politicians do best – lie – wasn’t going to work in her case.

She could deny all she likes to the media – but the Ethics Committee would probe deeper – and they might find out the truth and she would be booted off more than just her committee position. She would have to fess up – after lying to the world – that she did have sex with, among many others, her legislative aide – or maybe get charged with perjury.

Likely some on the committee who would probe her, also, themselves, had sex with their legislative aides – but optics are optics and what you don’t know won’t smear you – and a woman is equal to a man – no excuse just for being a woman in Congress.

She fucked her legislative aide and she cannot lie her way out of it.  She is caught and has to resign.

So, sure, the sting of embarrassment – [there are other pics of her that Kenny is set to release] and people laughing at you behind your ass – and weirdos getting kind of turned on by her randy rawness – so in conflict to the supposed dignity of her position – sending her crude messages – are tough to live down – but a  member of Congress can often get past such things.

Why one dude drove drunk and killed a girl and left her in a car to die and went on to run for president.

But stupid Katie committed herself to a position. She denied having sex with her taxpayer-funded aide. When likely she did.

The other things she did, did not stop her. She could have still worked in Congress and stayed on in one of the best jobs in America.

They get rich, these rascals. They come in poor and leave rich and it’s no accident – and while in office, they live a pampered and privileged life – with great income disparity over those that elect them – and that makes me hope that Democrats will be first in their fight for pay equality to demand they cut their own salaries by two thirds.

So, who gives up that kind of job over naked pictures?

No one. [Although a little rascal named Chris Lee claims to have done that a few years ago]. The mess-up was the lie.

Katie perhaps should have admitted right off that she was indeed having an affair with Graham – and that’s why she dumped Morgan and Kenny. But she lied and tried to make out like it never happened.

Sadly, her husband knows and there are others who know and there are consequences for lying to the Ethics Committee. If she quits, the investigation stops.

Maybe good old Katie just wants to go back to the party she was having day and night before she went to Washington. Still, some say it’s too bad.  For Katie Hill was really putting the “party” back into the Democratic Party.

Was Erin Valenti Killed by the Very Brainwave Interface Technology She Sought to Expose?
Feds Arrest Church Leaders of ‘Tough Love’ Program for Homeless Drug Addicts for Going Too Far – But Did Feds Go Too Far?
Comment