.All quotes from Toni Natalie’s book, The Program: Inside The Mind Of Keith Raniere And The Rise And Fall Of NXIVM, are printed in bold italics. That’s because I don’t want anyone to think I wrote any of that tripe. 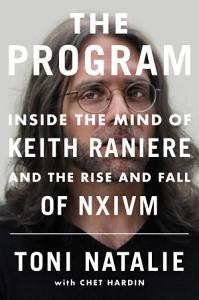 Putting aside, for now, all the unsubstantiated statements, hyperbolic claims, and outright lies that permeate the book  – and, trust me, there are plenty of them – the one thing that stands out most clearly is that Toni thinks she’s really pretty.

Sometimes she tries to subtly drop in that thought when she’s describing some aspect of her interactions with various other people.

Other times she just slams it home with all the force of an NFL defensive lineman smashing an opposing quarterback into the turf.

Toni starts off describing her beauty by quoting Kristin Keeffe’s reaction when she first saw Toni talking to Keith in the CBI offices.

“Keith, is Valerie Bertinelli working here now?” is, according to Toni, how Kristin Keeffe responded.

“Keith seemed not to understand the reference, but I did, and I smiled at the compliment” is how Toni describes the encounter.

But for some reason, Kristin has no recollection whatsoever of that exchange.

I mean how many Valerie Bertinelli references does one make in life?

“You have lovely eyes”

Next comes the oft-repeated story of how Keith cured Toni’s smoking habit via a 2-hour-and-45-minute one-on-one therapy session during that same visit to the CBI offices (Spoiler Alert! – Toni’s then-husband, Rusty DiCook, says she was alone with Keith for less than 30 minutes).

As Keith was holding her hands and “…rubbing his meaty thumb into the contours of my palm, surveying my life line, my love line, my fate line… He gazed deep into my eyes, and I met his gaze—his bright blues burning into my greens. ‘You have lovely eyes’, he said matter-of-factly”.

[And “Yes”, dear Frank Report readers, I did laugh out loud when I read what shall forever be known as “the meaty thumb passage”].

The next vignette where Toni’s beauty just happens to pop up in the story is when she is recounting her interaction with Mr. Harris, one of her high school teachers.

Although she had failed a class taught by Mr. Harris in her freshman year, Toni re-enrolled in the same class during her sophomore year.

But, alas, two weeks into the first marking period, Mr. Harris asked her why she was taking the class again.

When she told him she liked him and was interested in the subject, “He smiled and patted me paternally on the hand. ‘It’s good that you work hard’, he said, with a note of finality in his voice, ‘and that you’re pretty’.”

She goes on to explain that it was because of Mr. Harris’ comment that she decided to drop out of high school and go to beauty school.

Or as she put it, “What he was saying, it seemed to me, was that I had no business in a classroom. My purpose on this earth was to work hard and be pretty”.

[Seriously, I am not making that up. That’s a direct quote.]

“My purpose on this earth was to work hard and be pretty”.

“You’re a beautiful woman, thirty-two years old. Why isn’t he making love to you?”

Our next encounter with Toni’s beauty takes place when she and Keith are having one of their daily intimate conversations after she and Rusty had returned home to Rochester.

During these conversations, Keith taught Toni about economics, literature, philosophy, science, theology, and the occult (Wow – Kind of like online courses before there was an internet!).

He also asked her endless questions about various aspects of her life: her childhood, her parents, her failed marriages, and her years of allegedly being sexually abused as a child.

When Toni confided in him that she and Rusty hadn’t made love for more than three years [a claim that Rusty vociferously asserts is untrue], Keith’s response was: “You’re a beautiful woman, thirty-two years old. Why isn’t he making love to you?”

But, as she says, “I did note, with some pride, that he had called me beautiful”.

“In stark contrast to my own beauty”

Up until now, all of Toni’s assertions about her beauty did not involve comparisons to anyone else.

Her beauty was absolute rather than comparative.

But that all changed when she left her husband and her five-year-old son and returned to Albany by herself for some special training with Keith.

One night when he was visiting her in her Best Western hotel room, they got into a discussion about the nature of Keith’s relationship with Karen, one of the three women that he lived with at 3 Flintlock Lane.

As Keith explained that he and Karen were not a couple – and that he didn’t find her at all attractive – Toni concluded that he was telling the truth.

Or, as she put it “This assessment was true. Karen was far and away the plainest woman in Keith’s orbit. And the way he phrased it, combined with the twinkle in his eye, seemed to suggest that Karen’s unattractiveness was in stark contrast to my own beauty”.

The new business was a line of skin-care products, aligned with … CBI….. The brand name was new agey and mysterious: Awaken.

[Weiss said] “With your background in cosmetology, your experience owning a day spa, your tireless work ethic, your easy way with people, and, let’s face it, your look”—he used this as an excuse to ogle me head to toe —”you are the perfect face for Awaken.”

The base salary was generous… I would not have to worry about a steady revenue stream… there was no question that I would take the job.

It’s good that you work hard, and that you’re pretty. Once again, my greatest assets were paying off.

Once again, Toni is telling her readers that she is pretty and, as a matter of fact, it is, to her, her greatest asset.

Toni writes, in her book: Later, after I left Keith, I learned that one of the modules was directly based on my leaving him. The ‘Fall” module presents Lucifer in the guise of a beautiful woman who has rejected the teachings of Vanguard…  In the “Fall” module, Vanguard teaches that Toni Natalie is the first suppressive and the ultimate Luciferian. All ESP students knew me by name.

Toni is the beautiful woman who rejected the teachings of Vanguard.

And even after she left Raniere, the Nxivm teachers [proctors] were required to call her pretty.

Toni writes, To hundreds of NXIVM students, I was Lucifer, the suppressive—the one he wrote the “Fall” module about. In the classroom, in the module called “Persistency,” the proctor would say, “Who is the pretty brunette with a green scarf?” and then explain, “That is Toni Natalie. We don’t talk about her. She is the suppressive that broke Vanguard’s heart.”

The story may be pure bullshit.  There is no one I spoke to who heard a proctor describe Toni as the suppressive that broke Vanguard’s heart.

But the point is made by Toni again – she is the beautiful woman who left Keith; the pretty woman in the green scarf.

The other thing that Toni makes clear in the book is that when Keith Raniere wasn’t scribbling notes to his attorneys on Post-It pads, he was looking at her throughout the trial.

Even on those days when he wasn’t wearing any glasses – which insiders have said he needs to see anything beyond 10-15 feet – he was looking at her.

And, per Toni’s recounting, the fact that she was sitting more than 100 feet away from him posed no problem whatsoever.

According to Toni, Raniere didn’t look at any of his co-defendants on the first day they were all in court together.

“Not Prefect and her daughter, not the bookkeeper, not the heiress and her fancy celebrity lawyer—not even the television actress, one of his lovers du jour, whose capacity for sadism may well match his own. They are all invisible to him, as if they have already withered away to nothing. Instead he looks at me”.

I guess Keith must still be enthralled with Toni’s beauty.

I think you get the picture.

Toni Natalie believes that she is beautiful – and that her role in life is to work hard and be pretty.

Given that she hasn’t worked at a regular job in many years, some might question whether she has given up on the working hard part.

But there is no doubt that Toni still considers herself to be very pretty.

Here is a song – from the 1957 Musical West Side Story that kind of sums up Toni’s view of herself.

I feel pretty,
Oh, so pretty,
I feel pretty and witty and bright!
And I pity
Any girl who isn’t me tonight.
I feel charming,
Oh, so charming
It’s alarming how charming I feel!
And so pretty
That I hardly can believe I’m real.
See the pretty girl in that mirror there:
Who can that attractive girl be?
Such a pretty face,
Such a pretty dress,
Such a pretty smile,
Such a pretty me!
I feel stunning
And entrancing,
Feel like running and dancing for joy,
For I’m loved
By a pretty wonderful boy!

Raniere to Be Sentenced January 17, 2020 – What Are Possible Sentences?
Bangkok Throws Down the Gauntlet to Kristin Kreuk Fanboys
Comment