This is in response to Allison Mack Was Excited About Having ‘Sister Wives’ and ‘Raising Our Babies Together’.

It mentions how Allison Mack and the other women were all seeking to have Keith Raniere impregnate them and how Allison loved the idea of raising her babies alongside her sister wives.

Where have we heard this before?

There was a case of something similar – of course on a much larger scale  – a planned Utopia – similar to that which so excited Allison Mack.

It was a program by the SS which was led by Heinrich Himmler.

The Vanguards of the human race for the Nazis were the blond haired, blue eyed Aryan men of Europe.

These Supermen  -Übermenschen – in German, would breed with racially pure women who were stabled like breed horses in maternity homes to produce a race of genetically superior human beings.

The off-spring of these unions would be educated in special schools to follow the teachings of Der Führer.

Special Schools, not unlike the Rainbow Cultural Gardens.

And it was all to be done for the betterment of the human race.

Of course, in NXIVM’s “Lebensborn,” the world’s Smartest Man was to breed with super skinny, even cadaverous, but bad-ass warriors like Allison Mack and Lauren Salzman. 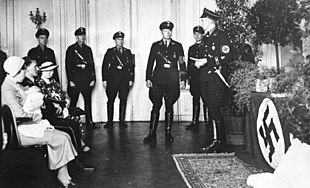 “Lebensborn e.V. … [from Wikipedia]  was an SS-initiated, state-supported, registered association in Nazi Germany with the goal of raising the birth rate of Aryan c.hildren of persons classified as racially pure and healthy based on Nazi racial hygiene and health ideology. Lebensborn provided welfare to its mostly unmarried mothers, encouraged anonymous births by unmarried women at their maternity homes.”

“Lebensborn expanded into several occupied European countries with Germanic populations during the Second World War. It included the selection of racially worthy orphans for adoption and care for children born from Aryan women who had been in relationships with SS members.

“During the war, many children were kidnapped from their parents and judged by Aryan criteria for their suitability to be raised in Lebensborn homes.

“At the Nuremberg Trials, much direct evidence was found of the kidnapping of children by Nazi Germany, across Greater Germany during the period 1939–1945.”

And so the liberal Allison Mack was excited by what could be described as a breeding experiment.

Daniela Padilla, Lauren Salzman, Mariana Fernandez, Camilia Fernandez, Allison Mack and who knows how many others – were all planning to take the Vanguard’s sperm [besides giving him a group blow job] and raise their babies together.

No doubt they believed this was meant to improve the human race – with sister wives bearing the Vanguard’s children – and it was not entirely dissimilar to what the Nazis wanted for Europe.

This is not as far fetched as one might imagine considering Raniere told several of his followers that they were Nazis in their past lives.

Allison Mack was born in Germany -so she might be more German than we previously thought.

In my humble opinion I think it would be better for the human race if the inner circle of women in NXIVM did not breed at all.