I received an email today which I will republish below exactly as I received it.

What’s the Story Here? Be Sure to View All The Way to the End.

We all know that Hiroshima and Nagasaki were destroyed in August 1945,
after explosion of atomic bombs.

However, we know little about the progress made by the people of that land
during the past 75 years.

What has caused more long term destruction? The A-bomb, or government welfare programs created to buy the votes of those who want someone to take care of them?

Japan does not have a welfare system. (READ THIS SENTENCE AGAIN AND ASK, ‘WHY NOT?’)

Work for it or do without.

These are possibly the 5 best statements you’ll ever read and all applicable to this social experiment:

1. You cannot legislate the poor into prosperity by legislating the wealthy out of prosperity.

2. What one person receives without working for, another person must work for without receiving.

3. The government cannot give to anybody anything that the government does not first take from somebody else.

4. You cannot multiply wealth by dividing it!

Hiroshima was destroyed – needlessly – by a Democratic president, Harry Truman, whose view of the sanctity of human life was startlingly nonexistent. While he lied to the American people that Japan still represented a threat to American military lives, scholars have completely debunked that. Japan had agreed to surrender before the A-bombs.

Truman’s decision to drop the A-bomb and kill men, women and children, in the teeth of almost every one of his advisers’ counseling against it – as unnecessary killing – had other, darker motives other than saving American lives. That is a topic for another day.

But it was done.  The blast at Hiroshima instantly killed 80,000 of the city’s 420,000 residents. Within a year, the death toll rose to 141,000, as survivors succumbed to injuries or illnesses connected to their exposure to radiation.

The present-day urban decay of Detroit may also have been needless – and possibly was caused by policies of the Democratic Party. This is not anywhere near as clear.

The email I republished above is not exactly new. One or another variation of it has been circulating since 2009.

Let’s analyze a few of its statements.

The email purports that “Japan does not have a welfare system.”

That is not 100 percent true. Compared to the Western welfare model where government takes on the role of the traditional family and the role of the traditional father, Japan has virtually no welfare system.  Families rather than the government provide the social safety net in Japan. There is very little government interference with parenting also. There is no CPS industry like in the US that financially incentivizes the official governmental abduction of children from their parents as there is in the USA.

One of the pithy statements in the email above is that: “The government cannot give to anybody anything that the government does not first take from somebody else”.

This, of course, is true but it needs a codicil.

The government actually has to take more money from working people [by force, i.e., taxes] than they can hand out since there are fairly heavy middleman costs for government to do the taking [taxing] and administrating the handouts [bureaucracy and the poverty industry].

This is why the heavy taxing of productivity almost always leads to financial collapse and is what the fool forgets. It costs $150-$200 of productivity to give out $100 of welfare – corporate or private.  So heavy taxation creates not only a welfare state, with many dependents, but creates a large welfare industry as well.

The implication that Democratic policies are wholly to blame for Detroit’s decline since World War II may not be fair.

It is fair to say that Hiroshima was rebuilt from its ashes and is now a modern city. But it should also be mentioned that US taxpayers paid billions [in today’s dollars] to help Japan rebuild – and that included Hiroshima.

Japan got welfare from America –  even though they started the war.

It might be worth analyzing which city got more money from US taxpayers – Hiroshima or Detroit.

Is there a simple reason for Detroit’s bankruptcy?

Part of it was caused by Japan – having been propped up by US tax dollars – competing with Detroit’s auto industry.

Another cause of Detroit’s decline was that the Big Three automakers chose to produce cars closer to regional markets.  This was caused in part by the ‘free market” since Detroit was heavily unionized and automakers could build more cheaply where unions were not as strong.

Then the corporate welfare policies of the US also helped sink Detroit.

In the 1970s and 1980s, municipalities and states began to compete with each other for jobs by offering corporate tax breaks and other taxpayer-funded inducements to lure business. This game of corporate welfare saw Detroit as a huge net loser.

Detroit’s decline also is tied to the fact that they were dependent on a single industry (automobiles) and between their unions, Japan’s skill at auto-making and corporate welfare, it lost a huge chunk of its main industry and did not have another main industry to offset it.

Between 1947 and 1963, the city lost over 140,000 manufacturing jobs. In the next decade, Japanese car imports took up a greater share of the US market, which took more jobs from the region.

As the city grew poorer, racial tensions did not help much either. It made Detroit an unattractive and comparatively dangerous place to live.

In the end, of course, Democrats had control of the city. Every Detroit mayor since 1962 has been a Democrat.

But to say Detroit’s downfall was caused by the spread of social welfare programs is not really true.

The high incidence of dependence on social welfare programs came as a consequence of the city losing its main industry, leaving behind an impoverished and shrinking population. Detroit shrunk by more than 60 percent from 1950 to the present. From a high of 1.8 million to an estimated 670,000 today.

The bulk of those who stayed behind are the poor and the elderly. Many of these are on social welfare programs.

It is unfair to say that Democratic social welfare programs destroyed Detroit, although I think it is fair to say, they won’t be able to fix Detroit either. 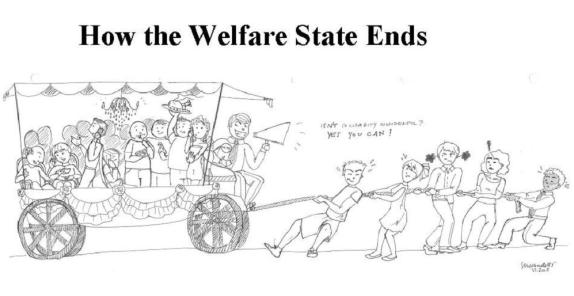 Ghislaine Maxwell and Clare Bronfman: A Tale of Two Heiresses and the Men Who Dominated Their Lives

Questions Answered About Elaine Smiloff’s Sex Offender Record – and How It Might Relate to the Disappearance of Kristin Snyder
Lauren Salzman Discusses Up Close Vagina Pics She, Allison Mack and Other DOS Slaves Took Together – Keith Was Having Sex With All of Them But Her
Comment

Ghislaine Maxwell and Clare Bronfman: A Tale of Two Heiresses and the Men Who Dominated Their Lives