Here’s an anecdote: A branch of my extended family sent their kids to Waldorf school. The kids now openly say say it was a cult – yes, they use the “c” word itself – and challenge their parents for having sent them.

Unfortunately, as insightful as they are, the girls in particular seem to have been badly damaged, and are so plagued by psychological problems and psycho-somatic illnesses that I fear they will not even really be able to live on their own as adults (they left or were taken out of Waldorf as things became untenable, and are now in special educational programs for young adults in need of extra support and structure).

I expect apologists will explain that away as not possibly having anything to do with Waldorf, or at least being due to the school not properly applying Rudolph Steiner’s teachings. But if I’d told you instead that the girls were doing fabulously, they’d have assumed that was surely the fruit of Steiner’s work.

And just because there may be some validity to principles such as colors being calming, doesn’t by extension apply to the leap that somehow Steiner’s peculiar, convoluted color philosophy has any particular validity.

That’s a fallacy – apparently logic isn’t taught in Waldorf or Anthroposophy – well recognized as an unsupported leap, and in particular one frequently found in cult indoctrination and apologetics.

I get that some are well-versed in defending Steiner as having been right regarding all the things that he might seem obviously to have been wrong about, or that just don’t seem to make sense in the 21st century.

They indeed seem unable to address the possibility that he could have been wrong about anything, which is sort of the working definition of culty adherence to a guru – just what we see playing out with Lauren Salzman, for instance.

And the claim that “Steiner really and truly was not a racist….but he was deeply aware of the realities of different races” smacks of just the sort of “yes, but” (or “but, yes”) disingenuousness that I was referring to. Thus confirming that they believe in Steiner’s teaching that different souls incarnate in different races depending on how advanced they are, even though they claim that is neither racist, nor potentially harmful when used as a basis for dealing with children in an educational environment?

Anyway, let’s go back to a basic reminder of Steiner’s “word salad” nuttery – keeping in mind that modern science has shown that race is actually a false construct, and that genetics in particular has shown that there are far fewer actual differences between various members of the human race than once thought:

The Occult Significance of Blood (1907) by Rudolph Steiner

“Who gains power over a man’s blood gains power over the man, and that blood is ‘a very special fluid’ because it is that about which, so to speak, the real fight must be waged, when it comes to a struggle concerning the man between good and evil.”
….
“Occult investigation shows decisively that all the things which surround us in this world — the mineral foundation, the vegetable covering, and the animal world — should be regarded as the physiognomical expression, or the ‘below,’ of an ‘above’ or spirit life lying behind them. From the point of view taken by occultism, the things presented to us in the sense world can only be rightly understood if our knowledge includes cognition of the ‘above,’ the spiritual archetype, the original Spiritual Beings, whence all things manifest have proceeded.”
….
“Questions of great importance are pressing upon us these days; questions dealing with the education, not alone of the young, but of entire nations … such questions are illuminated as soon as we recognize the nature of the spiritual essence which lies at the back of our blood. Who can deny that this question is closely linked to that of race, which at the present time is once more coming markedly to the front? Yet this question of race is one that we can never understand until we understand the mysteries of the blood and of the results accruing from the mingling of the blood of different races.”
….
“To what extent are uncivilized peoples capable of becoming civilized? How can an utterly barbaric savage become civilized? And in what way ought we to deal with them?”

If that sounds reminiscent of German Nazi theory about blood and race, they are indeed related – through Steiner’s connections with occult groups. 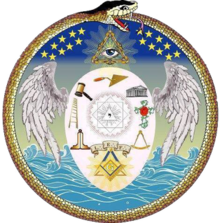 Shall we get into Steiner’s Rite of Memphis-Misraim lodge, and its connections to the Thule Society that spawned the Nazi party? (And, yes, the Nazis ultimately cracked down on Waldorf Schools – at the point they were settling scores with erstwhile allies come to be seen as rivals for power and influence, in what can be viewed as more of an internecine conflict).

Next up: Should we consider that Keith Raniere may have been Steiner’s reincarnation and successor?

Despite Being Persecuted by Clare Bronfman, Barbara Bouchey Prayed for Her and Encouraged Her to Have Better Future at Sentencing

Despite Being Persecuted by Clare Bronfman, Barbara Bouchey Prayed for Her and Encouraged Her to Have Better Future at Sentencing

Susan Dones Weighs in on the Nxivm-5 and Their Efforts to Save Raniere – ‘What Is Wrong With This Picture?’