For years, Ivy Nevares was a dedicated member of Nxivm. At one time, she was also Keith Alan Raniere’s favorite girlfriend, a role she rose to and later lost in his constant maneuvering of women in his harem.

Ivy co-wrote two books with him and for years he deceived her, saying he would sire for her an avatar baby.

Ivy believed it, I suspect, because she believed in him.  He spent years abusing her, dangling a serious relationship and a child before her, while secretly mocking her and openly punishing her to ensure she did not have success in her life and was dependant on him.

But she thought his cruelty was actually discipline meant for her betterment so she endured because she wanted to be a better person.

His cruelties to her were remarked upon my many ex-Nxivm members. But she did not know he intended to be cruel.

He punished her for gaining weight and this woman, with remarkable discipline, reduced her daily caloric intake to 500 then 300 calories. She became obsessed with her weight, to please Raniere, while all the while the monster did not care, as he stuffed his own face with pizza with hot sauce and chocolate cake and laughed at the women who starved themselves.

After telling Ivy she could not cut her hair, for it would be a breach against him, she let it grow. He, in turn, mocked her behind her back, when it grew down past her feet.

Sure it would be easy to mock her, as Keith did, but she was faithful and fiercely determined and consequently, like all who were faithful to Raniere, she suffered at his hands.

Ivy has come to realize after more than 15 years in Nxivm, that he was a monster from the start, that there was never any good in him.

Recently, she has taken to Twitter to publicly repudiate him and warn people about the new dance-protest group, weareasyou AKA The Forgotten Ones, led by seven Nxivm members. The group dances nightly in front of the Brooklyn Metropolitan Detention Center, where Raniere is being held awaiting sentencing.

I think her Twitter posts are interesting because they are authentic and reveal how a former lover of Raniere’s now feels about the psychopath that stole years from her life.  Ivy joined Nxivm in its early days, throwing away a promising career in NYC as a writer and editor.

On her Twitter account, Ivy describes herself as “Editor, Writer, Author. I wield a pen, rather than a sword, as carefully as I can.”

She started tweeting about the dance group on July 9.

If you’re following #WeAreAsYou and come across @WeAreAsYou , be warned: Some of the organizers belong to the sex trafficking ring #DOS and support convicted pedophile #KeithRaniere. They are Nicki Clyne, Danielle Roberts, Michelle Hatchette, and others. #NXIVM #SOP #cult

To the #DOS and #NXIVM organizers at @WeAreAsYou: Why only protest injustices at #mdcbrooklyn? Why not also at #MCC and #Rikers? Why nowhere else in the country? Come clean. You owe your innocent followers that much. You owe #BLM that much. #WeSeeYou #WeAreAsYou #KeithRaniere

@WeAreAsYou #DOS and #NXIVM organizers: Keep dancing for your #sextrafficking master #KeithRaniere each night. Keep defiling #prisonreform and #BLM as you are. Keep insulting the art of dance itself until you #comeclean. We see through you, #weareasyou: we are NOT as you.

Oh boohoo! @WeAreAsYou stopped its livestream because their #DOS and #NXIVM organizers were bombed by the press and trolls who demand they #comeclean. Will you? Or will you keep dancing for your #pedophile and #sextrafficking master #KeithRaniere? #weareasyou we are NOT as you.

@WeAreAsYou: “In America, we don’t say the N-word and we think we don’t have slavery because of that.” Mmm, #NXIVM, tell us all about #slavery and your master #KeithRaniere. Nicki Clyne, Danielle Roberts, Michele Hatchette: would you please stand up? https://tinyurl.com/yavxq4pg #cult

Tweeting out a link to the Forgotten Ones press release, Ivy commented:

@WeAreAsYou : It goes to show #KeithRaniere didn’t teach critical thinking, but rather spinning word salad. “There’s no good deed that won’t have hate.” I see, truth is now “hate.” Say those words to yourself when you look in the mirror, you puppet.

Powerful. A legitimate movement calling out @WeAreAsYou  and its #DOS and #NXIVM organizers for hijacking a noble cause to serve their #pedophile and sex-trafficking leader, #KeithRaniere. Believe it now. BEWARE of this group and #wearetheforgottenones. #comeclean #cult #SOP #ESP 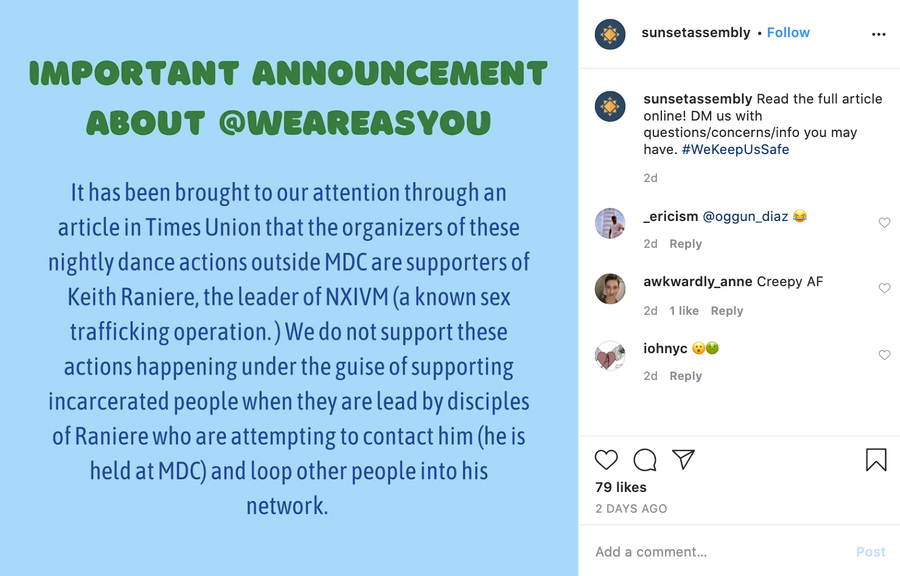 @WeAreAsYou  rebranded its website to “The Forgotten Ones.” But with a #cult leader like #KeithRaniere, who’s a convicted pedophile and sex-trafficker, how would any of you #DOS and #NXIVM organizers ever be forgotten?
{Ivy minces no words. She is calling Raniere a pedophile and sex trafficker. Her leaving Nxivm is complete and represents a 360 degree turn in her viewpoint. She formerly defended and praised him on her blog and writings.]

OMG your tags!!  KKW, really? Why not tag

and show us who the real #DOS #SOP and #NXIVM members are? Why hide who you and #KeithRaniere really are? #WeAreAsYou #cult

She has now taken up writing against him.  This is a fascinating chapter on cults, and the one that Raniere led. It fell apart and many of the women he hurt are now putting their energy into paying him back.  That is only fair.
Raniere is suffering now.  He has been in custody for more than two years, almost all of it at the squalid MDC prison where no prisoner gets to go outdoors. Think of that — for more than two years, Raniere has never been outside for a walk, or a breath of fresh air, to enjoy the sun or feel the rain. Most prisons have yards for prisoners to get outdoors and claim the birthright of every human – to allow nature to heal them and balance them.  But not MDC. And not Raniere.
He is now the slave of the state, who is under orders 24/7, just as his women were for years.
It is not clear when Ivy actually left the Nxivm cult. It may have been as early as mid-2017, or as late as 2019. She was not the first to leave and not the last.
I recall hearing how upset she was upon learning that Keith Raniere and Mariana Fernandez had a son together in August 2017. She had thought that she was to be the one to bear his child, as he had promised.
The leaving of Nxivm can only come at the right time. Ivy was not ready until she was ready.  Back in 2016, I wrote an email to her urging her to leave Raniere. I reach out to Ivy Nevares and Keith Raniere.
She did not respond.
Again in 2018, on March 21, just five days before Raniere was arrested, which came as a surprise to all of us, I called out to her in the post:  115 Grenadier – Ivy Nevares are you in there?
She appeared to still be living in Knox Woods, Raniere’s old subdivision. She did not respond to my question.
Now, today, she is out and calling Raniere what he truly is.  I called him that years ago and she did not believe me.
Today, I watch the videos of Nicki Clyne, Danielle Roberts, Michele Hatchette and the others foolishly dancing for their master Raniere and I remember too that Ivy was a dancer, who danced at Vanguard Week for her master, Raniere, for several years.

I can’t help but think that the awakening that Ivy had, sometime between 2017 and 2019, will come one day to Nicki Clyne, Danielle Roberts. Michele Hatchette and the others.  It has to happen.

Raniere is going away for years – and will likely be moved out of state to a high-security, possibly even a supermax facility.

And just like Ivy, and so many others, who woke up one day and realized Raniere was a con artist, a monster, a creep and a fool, so will the remaining members, sooner or later.

They will wake up. They have to.