NEW YORK, NEW YORK -Today was a beautiful day in New York, the sort of day that brings out people in droves.

A bit chilly with lots of sun and a mild breeze; spring was in the air. Spring, glorious spring.

And yet, no one to be found in the streets. Shops were shut. Schools were closed. Even the homeless were staying out of sight.

Central Park did have its share of visitors, each politely staying away from the other, trying to forget reality on Hackberry Hill or Strawberry Fields.

But it was not the same as usual. It has never been this way since 1858, when Frederick Law Olmsted, Calvert Vaux and Jacob Wrey Mould gave to the US its premier urban parkscape.

Then, multitudes came to skate, play, relax, or row a boat across The Lake, viewing the Point and other sides of The Ramble from the tranquil waters.

Today boats in the Loeb Boathouse are stacked on the dock, the gondolas out of sight. The waters are more tranquil than ever. Deadly tranquil.

This is the new normal. People are dying still at the rate of two a minute in America’s biggest city. There are less checking in to hospitals than there were, so some light is expected at the end of the tunnel.

But so far, darkness reigns in the middle of the day.

And in the middle of this April day, a few New Yorkers challenged the darkness that even their leaders do not take on.

We had all seen the facts that the People’s Republic of China has been playing with viruses in their Level 4 lab in Wuhan, and that now three or more of these viruses have caused damage to mankind.

SARS and MERS, and now COVID 19, which is a SARS; all are coronaviruses.

This last one has shut down 182 nations across the globe, killing thousands and affecting billions.

Billions who are desperate, crying out for relief from the plague that has cost them loved ones; taken away their jobs; shattered their dreams; deprived them of liberty.

We pursue a change, but it seems in vain. Lives are lost, liberties curtailed.

The enemy is relentless, the onslaught of news is driving people mad. Breaking news is breaking hearts. The whole world is over the edge, way past a nervous breakdown, going broke with no hope.

But not quite the whole world. A few places have mercifully escaped the scourge, but they are few and far between, and in each of them the citizens wait in dreadful anticipation of what awaits, of the outbreak that came from the People’s Republic of China, that land that was once respected but has since become shunned.

Shunned, for its habit of removing organs from live human beings; for its persecution of religious minorities, especially the Uyghur Moslems; for its torture of political dissidents; for its boiling of live animals. For a thousand other reasons. Hitler might be proud of them. No one else would be.

And Hitler might congratulate them for making a war in secret, a war with an invisible enemy that no gun can shoot. There seems to be no way to stop this.

Surprisingly, the People’s Republic of China, which is the birthplace of this and other coronaviruses, is not just back to normal, but ready to take on more industry, and ready to sell infected nations medical supplies; some of which don’t even work.

And no surprise that the virus managed to jump from Wuhan to New York, infecting most if not all American counties, while Beijing and Shanghai are basically unscathed.

Whispers abound; do the Chinese have a cure that they are not telling the world about?

Was this a plan all along to kill all Americans, as Trump continued to force them to deal fairly with the US?

In the 1930s, similar whispers echoed around the world about a journalist who had come to power in Germany. A charismatic leader, who talked about free healthcare and free education, and who had started a socialist movement.

Whispers were ignored, and the New York Times refused to print stories about concentrations camps. Stories of him having used the Gestapo to set the Reichstag Fire in February of 1933 were dismissed as conspiracy theories; but later proven true.

In this environment, proposals to take action was put down. British Prime Minister Neville Chamberlain insisted smugly that the Nazis ought to be left alone.

But wiser heads prevailed. Winston Churchill, then the Defense Secretary, took the reigns at 10 Downing Street and the madness of inaction and appeasement was reversed.

Churchill was not always popular, even in his own party. I refer my reader to the Gary Oldman’s interpretation of this great leader in the modern film “Darkest Hour”.

Say what you will about him, many tried to prevent him from taking the United Kingdom to war in his day, but he was right. His critics were idiots; or worse, apologists for Hitler.

Today the United States is in its darkest hour. We do not need any more lack of action on the part of politicians, and I am saying this to both sides.

Many are dragging their feet on closing the door to the People’s Republic of China, as if they doubt that PR China created these viruses in the labs.

How gullible can they be? Or are they, like some of Churchill’s critics, secret sympathizers with the enemy? Some, we know for a fact, have had PR China’s spies in their pay, others have received money, millions of dollars, outright.

A former president obligingly gave PR China American missile expertise; and there is a former VP who got his hands into the till with that nation as well. A former PR Chinese agent once told me straight up that PR China was implementing a plan that included subverting politicians and journalists. 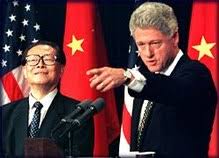 These kind of people we do not need ever, and certainly not in America’s darkest hour. No one needs gullible fools who want to wait and see. See what, the destruction of America as PR Chinese officials are allowed to continue to operate behind the walls of their diplomatic/deep cover posts on American soil?

Just say no to this, and say yes to an immediate order to remove ALL PR China officials and citizens from American soil.

With this move, and a simultaneous move of embracing all the loyal Chinese Americans, many of them not even from PR China but from Hong Kong and Taiwan, we can secure America.  We need the enemy out and those who can advise us about the enemy listened to.

I have had help from this community for the actions that I took earlier today, Wednesday the 15 of April. They are with us in our darkest hour. God bless them.

Followed by a small group of supporters, I spoke about this with the USS Intrepid in the background at Pier 84. Then we walked a couple blocks south to 43rd Street and 12th Avenue, where the consulate of the People’s Republic of China is located. On the front of this building, I posted an eviction notice, citing the suspicion of bio-terrorism as the reason for the eviction, which I demanded was to take place immediately, with the building to revert to American ownership.

And this move could go ignored or disparaged. Or it could be picked up on by 325,000,000 who don’t want to wait and see. The latter choice is the right one.

America, this is your darkest hour.  I will close with the fact that I have prayed about this and know it to be of the Lord. Vacillation and any form of hesitation or cowardice are what Satan will use to buy time while his servants in a foreign biolab determine your future.

Here are videos of the event: Ken Gibson and others calling for the removal of Chinese spies in the USA