‘Official’ NYC data for emergency room visits has been released…

NYC emergency room visits are back down to normal levels from January.

NYC emergency room visits peaked on March 25th — but since then, they are down 55% and are now at normal levels.

NYC emergency room visits are now equivalent to where they where in January, LOL, according to the official graphs.

Look at the official charts to verify this fact. 🙂

Don’t pay attention to the idiots who tell you to ignore the REAL DATA and instead listen to whatever gibberish they can copy and paste from Huffington Post, lol.

I can’t speak for everybody else here, but for me, I’d much rather rely on REAL ‘official data’ (rather than liberal rubbish that tells us to ignore the REAL DATA). 🙂

What about DEATH RATES?

Death rates are still elevated because that’s a ‘lagging’ indicator which will always lag behind hospital visits, but emergency room visits are clearly going way down in NYC —– and it’s doubtful that the economy will stay shut down beyond mid May at this rate.

Oh… On a different note…

A new study shows that higher temps do bring down the rate of infection of COVID, just like the flu. This is not a surprise since this is how most viruses operate.

So yes, Trump was being pragmatic when he predicted that summer would see the virus decline due to hotter temps. Only an idiot would assume otherwise.

The combination of these 2 facts (lower hospital rates plus hotter temps coming) is gonna make the scare-mongers blow a gasket, lol.

This is backed up by REAL data.

1) The ‘hysteria’ is causing many people who don’t have the virus (who have minor cold/flu symptoms) to visit the hospital out of extreme fear —– which causes them to become infected after being exposed to other infected patients or staff, even though they would never have visited the hospital except for the media hysteria causing them to ‘overreact’.

In fact, people are now being asked to stop showing up at hospitals with ‘minor symptoms’ —– to prevent them from getting infected, LOL.

The media is causing this extra spread of the virus, LOL.

2) The lockdown is causing ‘asymptomatic’ patients (infected people with no symptoms) to stay home all day and huddle around family members, causing the family to all get infected, LOL. This guarantees that everybody at home will become infected without even realizing that one of them was the original carrier. 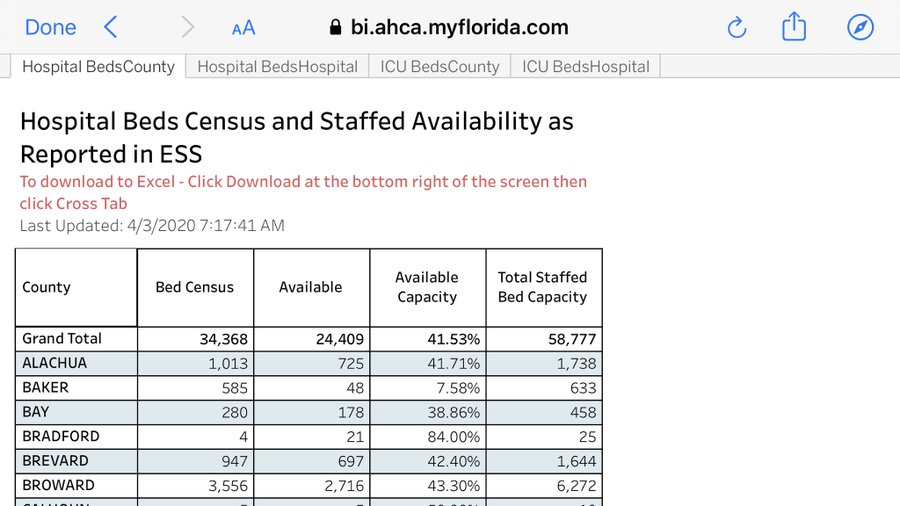 Florida hospital capacity not even CLOSE to being full, LOL.

Plenty of room in Florida hospitals and ICU beds, despite the recent ‘surge’. LOL.

Watch this video of empty hospitals!

New videos have emerged from CITIZEN REPORTERS who decided to film for themselves what the TRUE atmosphere is like inside hospitals.

This is a MUST WATCH video…

*Lots of fishy bullshit is being exposed and the liberals don’t want you to see this stuff.

Europe’s unity is fracturing as richer countries (like Germany) refuse to dig deep into their pockets to aid the poorer countries like Spain and Italy.

We’ve all been told that Europe’s grand vision of ‘unity’ and ‘equality’ is the future.

We’ve all been told that the ‘greedy’ USA is not generous enough with its neighbors, LOL.

Yet when push comes to shove (and people are dying in Europe) the wealthier European countries are giving the MIDDLE FINGER to their southern neighbors. LOL.

In Europe, it’s every man for himself.

In Europe, it’s FUCK everybody else.

So much for the European vision of unity.

Germany is confirming that autopsies are being discouraged for Coronavirus cases —– which means finding out the TRUE REASON for each death can never be 100% accurate.

This is likely to FALSELY INFLATE the Coronavirus ‘death count’ because it’s impossible to know for sure what caused a person’s death in many of these cases where other serious health issues brought them into the ICU in the first place —– UNLESS an autopsy is conducted.

Science is being replaced by nonsense. LOL.

People seem to WANT higher inflated death counts without VERIFYING for sure what caused EACH and EVERY death.

Quote from article/video:
===========================
Germany: The German Robert Koch Institute now even advises against autopsies of test-positive deceased persons because the risk of droplet infection by aerosols is allegedly too high. In many cases, this means that the real cause of death can no longer be determined.

A specialist in pathology comments on this as follows: Who might think evil of it! Up to now, it has been a matter of course for pathologists to carry out autopsies with appropriate safety precautions even in the case of infectious diseases such as HIV/AIDS, hepatitis, tuberculosis, PRION diseases, etc. It is quite remarkable that in a disease that is killing thousands of patients all over the world and bringing the economy of entire countries to a virtual standstill, only very few autopsy findings are available (six patients from China). From the point of view of both the epidemic police and the scientific community, there should be a particularly high level of public interest in autopsy findings. However, the opposite is the case. Are you afraid of finding out the true causes of death of the positively tested deceased? Could it be that the numbers of corona deaths would then melt away like snow in the spring sun?“

Quote from article:
===========================
Professor John Oxford of Queen Mary University London, one of the world’s leading virologists and influenza specialists, comes to the following conclusion regarding Covid19: “Personally, I would say the best advice is to spend less time watching TV news which is sensational and not very good. Personally, I view this Covid outbreak as akin to a bad winter influenza epidemic. In this case we have had 8000 deaths this last year in the ‘at risk’ groups viz over 65% people with heart disease etc. I do not feel this current Covid will exceed this number. We are suffering from a media epidemic!“

Austrian authorities have acknowledged that people dying of other illnesses are classified as dying from “COVID” even if they caught the virus while laying in the hospital and dying of another illness unrelated to COVID symptoms. LOL.

You can’t sugarcoat this FACT with liberal gibberish, lol.

This is how all worldwide death figures from COVID are reported.

We just can’t get an accurate death number because anybody who dies WITH coronavirus is reported as dying FROM coronavirus, even in cases where they died of other causes.

Quote from article:
=======================
The BBC asks, Is coronavirus causing the deaths? and replies, “It could be the major cause, a contributory factor or simply present when they are dying of something else.“ For example, an 18-year-old man was reported as the youngest Corona victim“ after a positive test the day before his death. However, the hospital later reported that the young man had died of a serious pre-existing condition.

Imperial College study predicting COVID ‘deaths’ was NEVER PUBLISHED or PEER REVIEWED and had all kinds of flaws exposed — yet it was used to shut down the world, lol.

Dr. John Lee, professor emeritus of pathology, is writing about the highly misleading definition and communication of “corona deaths“ in the British Spectator.

CBS aired hospital footage from Italy but claimed it was from a NY hospital.

The US television station CBS was caught using footage from an Italian intensive care unit in a piece on the current situation in New York. In fact, dozens of recordings by citizen journalists show that it is currently very quiet in the hospitals on the US East and West Coast, described as “war zones“ by the media. Even the “corpse refrigerator trucks“ prominently shown in the media are unused and empty.

FRAUD has been detected.

Well, they are counting ‘retired psychiatrists’ or ‘retired pediatricians’ who were 90 years old among these doctor deaths, LOL, which gives the FALSE impression that these were ‘working doctors’ who were fighting to save lives in the hospital — when they weren’t.

But that’s not all.

To cover up their fraudulent reporting, they began deleting the date of birth for every deceased doctor AFTER critics began reporting this fraud (to prevent people from seeing these facts).

Luckily, the web page showing their ‘date of birth’ was saved at a web archive below:

Quote from article (translated from Italian):
=======================================
Various media reported that more than 50 doctors in Italy have already died “during the corona crisis“, like soldiers in a battle. A glance at the corresponding list, however, shows that most of the deceased are retired doctors of various kinds, including 90-year-old psychiatrists and pediatricians, many of whom may have died of natural causes.

Respirator-Bro Gets Into Jam By Coughing at FBI Agents Then Lying Too – After He Price-Gouged Respirator Masks
Omar Rosales: Justice in the Age of Corona – Will Artificial Intelligence Be Employed in Our Legal System?
Comment