GROUND HOG DAY ALL OVER AGAIN…!

On April 28, 2016, I wrote this column which was published by Artvoice under THE RIGHT SIDE. Barrack Obama was president and Donald Trump had not been elected yet.  The parenthesis added to the original story are my update and are in bold.

In order to get America back on its feet we need to create jobs for the American people and do it fast.

(DONE, IN TWO YEARS EVEN AFTER SOMEONE SAID, “Trump needs a magic wand.”)

We are in an energy and economic crisis. We must become energy independent if we are to survive as a Nation.

Right now the Saudi King and his OPEC followers are running our economy with an overwhelming influence on the price of oil.

When North Dakota started hydro-fracking and pumping oil, we increased domestic output to over a million barrels a day – and we did it in less than 2 years. OPEC panicked and started dropping the price of oil about a year ago – for no other reason than to shut down our fracking operations in North Dakota.

Then oil production in North Dakota’s Bakken shut down, because prices couldn’t sustain production costs. The average pay to all North Dakotans was over $60,000 per annum, just over a year ago – and unemployment was near zero. Not anymore.

The cost of oil being down is a good thing, but how and why it got there is not. Saudi Arabia should not be exercising that kind of control over our economy. (STOPPED)

President Barack Obama is a puppet of the Saudi King. A President of the United States of America shouldn’t bow to anybody. 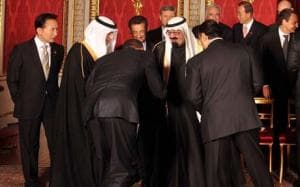 A real President doesn’t hide his passport from the American people and he doesn’t alter his Selective Service records. He doesn’t produce a “Birth Certificate” after looking for it for 4 years only to learn that it is forensically suspect.

When Obama directed the EPA to shut down 40% of our power plants because they are coal fired, I wrote several articles warning of Obama’s use of the Environmental Protection Agency as a unilateral legislative branch. That’s unconstitutional. The Supreme Court has said as much.

If a President Donald Trump were to request that all 50 States take part in an energy-to -prosperity program by building a single new power plant in each state – powered by what each state feels is in its best interest – we would see America moving in the right direction. We’ll revive steel plants and cement factories – and could do so with American materials and American citizens.

(PRESIDENT TRUMP MADE THE US, ENERGY INDEPENDENT IN HIS OWN WAY, USING AMERICAN LABOR AND PRODUCTS)

On Tuesday, March 15th,(2016) Hillary Clinton echoed Obama’s words in 2008: “I will close all coal mines and coal possessing operations.” Clinton admits that she plans to follow in the Obama Administration’s footsteps.

(Substitute ANY 2020 Democrat Candidate’s name for the name, “Hillary Clinton” and tell America, what’s the difference? What changed besides America being well on the Road to Greatness, thanks to America’s choice to keep our Constitution by electing our current president)?!

New York State, Overtaxed, Over-Regulated, Disastrous for Business, in Dire Need of Immigrants to Stem Population Loss and Vote Democrat
How Raniere Attempted to Use Gina Hutchinson to Have Her Brother Imprisoned
Comment