Keith Alan Raniere has a chance at winding up at the ADX super-max facility in Florence, Colorado.

He cannot be sentenced to a low-security camp. Anyone with a sentence of more than 10 years must serve their time in a maximum-security prison. And per the applicable sentencing guidelines, Raniere has to receive a sentence of at least 15 years (He’ll more likely get much more than that – and maybe even life)

The question is does he go to a maximum-security prison somewhere in the Northeast – or for his own safety and the safety of other prisoners – to a supermax facility like the ADX supermax US Penitentiary in Colorado?

Raniere will be sentenced sometime in the first half of this year.

He may be deemed a super danger. He is, after all, a man who has been known to hypnotize others. He had a cult that made women and men do extraordinarily destructive things, including branding themselves, starving, going without sleep, and giving up their money and sanity to him while thinking he was their savior.

Running amok among prisoners, and potentially with Bronfman funds to back him from the outside, he could wreak havoc in certain prison settings.

With Bronfman funds used to bribe guards and buy prisoner protection, he might cause a great deal of harm in a maximum-security prison – which is one of the arguments for sending him to a super-max facility.

Where he winds up will be based to some degree on his Pre-Sentencing Report, which we already know is going to be drastically negative.

It is replete with victim impact statements – largely from women – scores of victims – who write about the horrors he imposed on them and how they fear him even from behind bars.

There is a chance Raniere may be assigned to the sex offender unit of some prison. He may also stick around MDC  for a time if there are going to be more charges against him and another trial.

But in the end, he will either wind up in a maximum-security prison or at a super-max facility like the ADX prison.

If it’s the ADX super-max, Raniere will long for the halcyon days he spent in MDC.

As Robert Hood, a former warden of the ADX, told the New York Times in 2015, “This place is not designed for humanity.”

The ADX US prison is located south of Florence, Colorado. Built in 1994 on 39 acres of desert, it is the most secure prison in the United States.

No one has ever escaped.

It has 12-foot high razor-wire-fences, 24-hour surveillance, laser beams, silent pressure pads, attack dogs that attack without barking if someone is found on the grounds, and gun towers with perfect sightlines.

The building is designed so that inmates have no idea where they are located in the facility.

It has a capacity of 484 prisoners.

Prisoners get out by death, transfer to another facility or, in very few cases, they live long enough to see their release date.

Convicts at Florence spend 23 hours a day locked-up and are only allowed outside of cells with leg irons and handcuffs.

Exercise time is limited and contact with the outside world is kept to an absolute minimum.  Their one-hour out of their cell may occur at any time of the day or night.

Their diet is restricted to ensure that the food cannot be used to harm themselves or to create unhygienic conditions in their cell.

More than 10,000 computer-controlled electronic prison gates all close automatically if any escape attempt is detected.

Inside it has 490 beds, 1,400 remote-controlled steel doors, motion detectors, and pressure pads.

Inmates are kept in solitary confinement inside 12 – by-7-foot concrete cells that are sound-proofed to prevent prisoners from communicating with each other by Morse code.

Prison librarians examine every page of every book touched by an inmate to make sure no messages are inserted.

Extreme sensory deprivation and social isolation are two of the fundamental techniques that are used to maintain order in the facility.

In the cells, there are two doors, one with bars and a second made of solid steel. The doors slide open and are controlled from a secure remote control station. Food is hand-delivered to each inmate by guards, but the inmate doesn’t see them. The remotely controlled bars separate each cell from a vestibule, and the solid steel door separates the vestibule from the hallway. Food comes into the vestibule through a slot in the door.

Each cell has an immovable bed, desk, and stool made of concrete and a combination toilet/sink and interior shower.

The toilets shut off if plugged and the showers are on timers.

Mirrors are made of steel. Radios, and, in rare instances, small black and white televisions where prisoners can watch educational close-circuit broadcasts, are used as privileges and are seldom awarded.

Each cell has a small slit for a window near the top of the cell, which a prisoner can look through by climbing on the desk, and which provides a view of the concrete walls of the exercise enclosure into which the inmate is released by remote control for one hour a day, five days a week.

During the hour he is allowed out, the inmate goes into the exercise enclosure, which is a concrete pit with vaulted ceilings and a 4-inch wide, 4-foot long skylight, where he can glimpse the sky, but not the nearby mountains.  The windows are angled so that there are no views of the world outside.

The exercise room permits the occupant to walk 10 steps in any direction, or 30 feet in a circle.

For the first three years, prisoners are not allowed to come into contact with other prisoners. The prison has a “step-down” program, by which prisoners can gradually earn their way, through good behavior, into less restrictive conditions. Over time, good behavior can earn inmates more “outside” time, and a possible transfer back to a less-secure prison.

At the center of the prison is an area known as “the Black Hole,” where the toughest convicts are kept in 148 punishment cells that are kept darkened and completely soundproofed.

Many of the prisoners, if they are not already insane, soon become insane.

Prisoners wail, scream and bang on walls of their soundproof cells. Some mutilate themselves, others carry on delusional conversations. Some spread feces and body fluids throughout their cells. Forty-one percent, according to one study, have hallucinations. Suicide attempts are common; some have been successful.

The current warden of ADX Florence is Andre Matevousian. 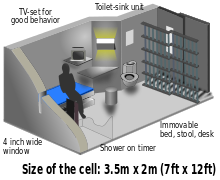 Dzhokhar A. Tsarnaev [the Boston bomber, sentenced to death]

Dzhokhar Tsarnaev and Tamerlan Tsarnaev, [built bombs that they planted at the 2013 Boston Marathon; the explosion killed three people and injured more than 250 and sentenced to death.]

Dwight York [Pedophile and cult leader, serving a life sentence  aka Malachi Z. York, founded the Nuwaubian Nation in the late 1960s  convicted of racketeering and child molestation (14 children testified against him), and sentenced to 135 years in prison.]