Among the items seized by the FBI at Keith Raniere’s “Library” at 8 Hale Drive was a book called “The History of Torture”. If the author’s name has been reported, I don’t recall seeing it. As a matter of fact, there have been several books published with the same title.

There is the History of Torture by Daniel Mannix, published 2014.

There is the History of Torture Throughout the Ages by George Ryley Scott, published 2013. 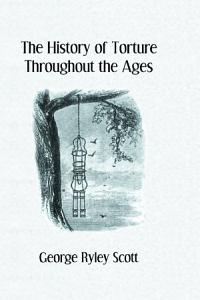 And the History of Torture by Brian Innes, published 2017.

It’s ironic – and telling – that Raniere kept a book on the history of torture; that branding was considered a traditional means of torture and for the marking of slaves; and that he actually employed branding on his own slaves.

In George Ryley Scott’s book, there are sufficient references to branding that one might suspect Raniere was inspired by the ancients.

In Chapter XVIII, we read about “Burning at the Stake, Branding, Boiling to Death, the Fire-pan and the Brazen Bull”. In another part, we read about branding, flaying, breaking of limbs, and amputation.

Under the subheading “Torture in the Guise of Punishment”, we learn branding and mutilation were common minor punishments.

Also from the book:

“Slaves were branded both for the purpose of claiming ownership in the case of escape, and as a method of punishment.”

The application of a red-hot iron to the breasts of the female slave was sometimes employed.

Raniere used the red-hot iron on the pubic region which is more discreet.

In England, branding was not abolished until 1834. In Russia, convicts were branded as recently as 1863.

In ancient Rome, Caligula would brand people for crimes which he deemed not sufficiently severe to merit execution.  He also confined people in an iron cage so narrow and low that the prisoner had to adopt a quadrupedal position.

It is said Raniere imposed the caging of DOS women for certain offenses.

Raniere’s defenders might argue that he did not go to the extremes mentioned in the book on torture. He is not known to have boiled anyone alive, flayed or fried any persons.

And it is not that Raniere invented the idea of branding slaves either. He had plenty of precedents. In England, branding was at one time widely practiced. The irons employed bore marks or letters of various kinds, for use according to the nature of the offense.

Raniere chose the letters of his own initials for his branding.

In merry old England, the inside of the left hand was chosen as the place upon which to apply the hot iron. Rogues and vagabonds were branded with the letter R; thieves with the letter T; and those guilty of manslaughter with M.

The objects of branding were twofold. There was the punishment effected by the red-hot metal being impinged, none too gently, on the skin; and the marking of the criminal so that if he was apprehended again for some later offense or other, the court would be aware of his previous crime.

Raniere’s more discreet branding – on the pubic region of the female – was a wise selection. It would not be as visible as if it would be on the left hand – but still serve the important purpose of informing any male who might trespass on his property – sexually – that he was the true and rightful owner of the woman.

Of course, even here Raniere borrowed – at least in part from the ancients.

In ancient times, branding was sometimes inflicted on sensitive spots. For shop-lifting, the penalty was burning on the cheek under the eye. For blasphemy, the tongue was bored through with a red-hot skewer; in a case of perjury, part branding on the forehead with the letter P was employed.

In France, for all kinds of minor offenses, the punishment was branding with the fleur-de-lis.

In Russia, branding was widely practiced in the fifteenth, sixteenth, seventeenth and eighteenth centuries.

Raniere kept the practice alive into the 21st century.

While the ancients also employed scourging, whipping, and the pillory where the ears were cut off, Raniere settled on branding as the best and soundest method. As he is one of the top three problem solvers in the world, we can only assume his judgment was sound on this matter.

Due to the exposure of his branding practices and his untimely arrest, Raniere never got to advance to some of the other ideas found in the book.  And at least several of them might have been right up his alley. In Russia, in addition to branding on the forehead, “crowning” with barbed wire, rolling in a nail-studded barrel, scalding with boiling water, injecting powdered glass into the rectum, holding lighted candles to the genitals, were a few out of a miscellany of tortures commonly used.

In India, there were the stocks, forcibly bending back the fingers, immersion in water to the point of drowning, dipping the hands and feet in boiling oil, and other equally enjoyable punishments – for the torturer.

If Raniere had been free a little longer- and he would have been, had it been up to the US Attorneys Offices in the Western and Northern Districts of New York – he might have had the chance to utilize these exciting methods.

He did get to use some.

In India, in addition to branding — deprivation of sleep and starvation were among the torments used.

It is well known that Raniere employed sleep deprivation and starvation as part of the constant torture he imposed on all women.

But perhaps we shall never know what the man was capable of doing. In the case of Keith Alan Raniere, it seems he was only getting started when he was stopped. Consequently, he never got to use the rack, or the wheel or other tortures used in Europe by the Inquisition.

Had Raniere not been stopped by the exposure in the Frank Report, followed by worldwide publicity in the New York Times – that led to an investigation by the US Attorney’s Office in the Eastern District of New York, his subsequent flight to Mexico and his arrest and detention, who knows what other methods of torture he might have employed in time?

He had the handbook, the money, the slaves and, evidently, the will to do it.

Yet another lawyer –Arizona Mafia lawyer John Sandweg appears to be on Clare Bronfman’s legal team now
FBI sifting through seized documents and videos – hampered by some 75 Bronfman-Raniere-Salzman attorneys where privilege has been invoked!
Comment